A few weeks ago I participated in a local 3000m race at Westmont College called Vicki’s 3000, named in honor of Special Olympics athlete, Vicki Paulsen. It was part of the Santa Barbara Athletic Association’s Grand Prix race series, which I’m participating in this year, and it was organized to help raise funds for the Special Olympics.

I have to admit I was apprehensive about racing in this event because I was still nursing a strained quad from the previous week’s State Street Mile. More to the point, I was dreading running 1.8 miles on the track because the track and I have yet to become BFFs.

Over the years she’s tried to lure me to her soft red surface, but then she’s either immediately bored me to death or kicked my ass, or both. I’ve been working hard to wrap my arms around speedwork and embrace the joys of the oval, but it has been a slooooww process.

This race may have finally changed my attitude.

I had a blast!

And I won my age group and received the awesome tank top you see in the picture above!

This shirt represents much more than winning my age group and running a PR though (it’s easy when your competitors aren’t able to show up and you’ve never run this distance before).

This is what this shirt really represents to me:

1) Being surrounded by a running community of WINNERS. In my mind, winning is about giving your best, and about lifting others up so they can also give their best. There’s no more supportive running community than Santa Barbara. You might disagree if you live somewhere else, but come here and experience what I’m talking about and you’ll soon be nodding in agreement.

This race was a perfect example of what I’m talking about. Vicki’s 3000 was divided into four self-seeded heats, with the elite runners going last. While I was busy running “pedal to the metal” 7 1/2 laps around the track, several elite runners were gracious enough to toss advice my way as they warmed up for their race. Simple reminders from people like Monica DeVreese and Nash Jimenez made such a difference in keeping my focus on the right things:

“Run from your core.”
“Lean into the corners”
“Keep your rhythm.”
“Watch your posture!”
“Use your arms.”
“Stride it out.”

2) This shirt also represents being completely wrapped in “running love” during this race–from the moment we took off to the last step across the finish line. Even if I had come in dead last, I would have still felt like a WINNER because everybody made me (and everybody else) feel like a rock star. I must have heard my name 50 times in the span of 13 minutes. Especially heartening was hearing all the kids I coach cheering, “Good job, Coach Becky!” “Way to go, Coach Becky!”

3) It also represents seeing so many of those same kiddos excel in this event. Our running community is WINNING BIG because it is now offering more and more opportunities for kids to join running clubs and participate in numerous races all throughout the year. The SBAA’s Jr. Grand Prix race series is making a huge difference with this. Seeing these kids’ spirit and unbridled joy lifts us all a few feet of the ground as we witness the next generation of runners falling head over heels for the sport we all love so much. It’s going to be exciting to see where they take all of this as they get older.

4) This shirt also reminds me that showing up is always half the battle. There’s no chance of winning or seeing what the possibilities are if you don’t show up. Any time I’m dreading going to the track to do speedwork, or feeling uncertain about a race, I’m going to wear this tanktop, suck it up and remind myself that WINNING is a habit, and habits take hard work and dedication before they form into actions that are automatic and nearly always enjoyable.

5) The topper to this whole morning? Also WINNING a super cool raffle prize–a free whole-body cryotherapy session at CRYOHEALTH, something I’ve been wanting to try for several months. I’ll be sure to tell you all about it after I go into the deep freeze. They say there’s nothing like a -220 F sauna for recovery. We’ll find out! I may never go back to those measly little ice baths again. 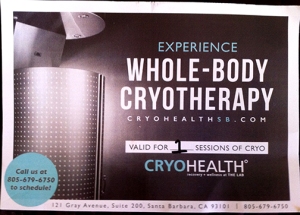 PS: Did I mention one of the most exciting things? This sweet little event raised over $850 for Special Olympics in the span of an hour! Now THAT’S winning! Thank you SBAA and Dave and DeAnna Odell for organizing this event, and for being so generous with your time, energy, and raffle prizes!