As Ironman training intensifies, and my dog has decided his job is to wake me up every night (don’t ask), I’ve become increasing loopy. I don’t mean a little loopy, I mean scary loopy. Sleep deprivation can do some seriously gnarly things to your mind.

Just in case you need a good laugh, I thought I’d share the last few days with you. I’m still chuckling at my ridiculousness.

Last Thursday, after another sleepless night, I went to the pool to do my swim workout. I wanted to be sure to finish in time for a Pilates class afterward, so I quickly threw my stuff in a locker and jumped in the pool. Even though I’m starting to feel stronger in the water, I was completely whooped at the end.

I knew I’d cut it a little short, so I rushed to my usual locker area to change, only to discover my lock wouldn’t open. Argh. I tried it again. Still no luck. Then while a lady was yammering to me, I tried it again and again. Something obviously had broken on my lock.

Having no other choice, I traipsed to the front desk wrapped in my towel to ask if I could borrow lock cutters. They won’t let members cut off locks though, so they had to round a female director to go into the women’s locker room to do it for me. This entailed several loudspeaker announcements, all the while I’m standing dripping, feeling ridiculous–chitchatting with the young boys working at the desk.

“It’s so weird my lock just got funky after all these years. Guess things just wear out sometimes…yadda yadda.”

Eventually, an older woman who looked like a Sherman Tank marched out from her office holding lock cutters, which looked like giant pliers for dinosaur dentistry.

She looked a tad annoyed, but humored me. Then she grilled me…”Are you sure you haven’t forgotten the combination?”

“No, I’ve had this lock forever. I could recite the combo in my sleep.” Bubble out of head {that is if I ever got any damn sleep}.

“I’ll try it first before we cut it,” she ordered. I gave her the combo, then she said, “And you’re sure it’s yours, right?”

“Yes, of course. It’s red. Nobody else has red locks.”

“While I try the combination why don’t you look around the locker room just to double-check.”

“Good idea,” I said to humor her, even though I was getting irritated because I was late for my class. “I hope I’m wrong,” I mumbled, “I’d be thrilled.”

You know exactly where this is going, readers…

“DON’T CUT IT!” I yelled cross the locker room.

Yep, as I turned the corner, there gleaming in front of my eyes was another red lock.

You can imagine the smirk on Sherman Tank’s face. I thanked her profusely, then we had a good laugh before I took my red face to Pilates and slunk to the back row. All I could think about as I was doing my 100s and bridges is what the person with the other red lock would have said or done when she returned to her locker and found her lock cut off. OMG.

You think that was bad…here’s the topper…

The next day, Friday, after a REALLY bad night’s sleep, I dragged myself out of bed for my epic swim-bike-run workout. I knew I had to dig deep for this one. I was dingy and light-headed before I even started. I contemplated switching my workouts so I’d simply run 10 miles, then do my long aerobic day the next day, but we had too many obligations in place for Saturday and I knew it would add a huge level of complexity to my family’s life if I switched it.

Soooo…after a giant cup of coffee and a big pep talk, I gathered myself up and headed out the door. This is after I nearly broke my jaw when I whacked it changing a giant water cooler bottle in our house earlier in the morning. I won’t go into the details. Just know that Laurel and Hardy would have been proud.

But I digress…For my Friday workout, I opted to drive to Carpinteria, about twelve miles from my house, so I could try something new and keep my training fresh. My plan was to swim in their outdoor lap pool, then do a challenging ride from Carp to Ojai and back over Casitas Pass. Then I’d end it with a 5K run along the scenic Bluffs. 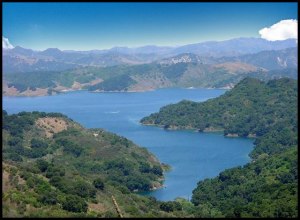 Lake Casitas (when it had more water)–the view on the way to Ojai.

I’d never been to the Carp pool, but changed in the women’s locker room and got right to my workout. It was fabulous swimming outside with a lane all to myself. Truly a luxury compared to the Y where I usually swim.

Even though it was a shorter workout, when I got out I was whooped and already in my own world as I headed to the locker room, giving myself a mental pep talk to get my ass on my bike and get it done.

As I walked through the locker room door, wiping my face off with my towel, I glanced up. It took a second to register, but standing before me was a skinny guy with a Sean Connery beard who was buck naked in the shower!

OMG, I was totally losing it. I had walked into the men’s locker room.

My hand quickly went up in front of my eyes as I backed out, apologizing for my mistake. The poor guy, who was just as shocked, laughed and said, “Whooooaaa,” as he tried to cover himself.

You can imagine how quickly I changed and took off on my bike after that. It was just the motivation I needed to bust out the rest of my workout. I wanted to get out of there before Sean Connery met up with me in the parking lot.

Thankfully, I survived the rest of the day without injury or incident, and in the end, felt incredibly pumped that I didn’t bail on my workout when the going got tough. It felt like I swallowed a tiny bit more of some Vitamin I (Ironman).

The funniest (not funny) thing is that I swear I passed Sean Connery four different times yesterday when I was out running my 10 miles. One Sean was on a bike, another was running, one was walking, and the one that most looked like him was carrying a surfboard, with his wetsuit pulled down to his waist. Aaaaaaack. He’s haunting me!

All I can say is thank god today is my rest day and I was able to sleep in until 9 o’clock. The rest of the world is safe once again.

Have a great rest of the weekend everybody, and know that even if you feel like you’re losing it, you’re doing just fine. Even Sean would agree with me on that!

29 thoughts on “OMG, You Did WHAT? Just Ask Sean Connery”